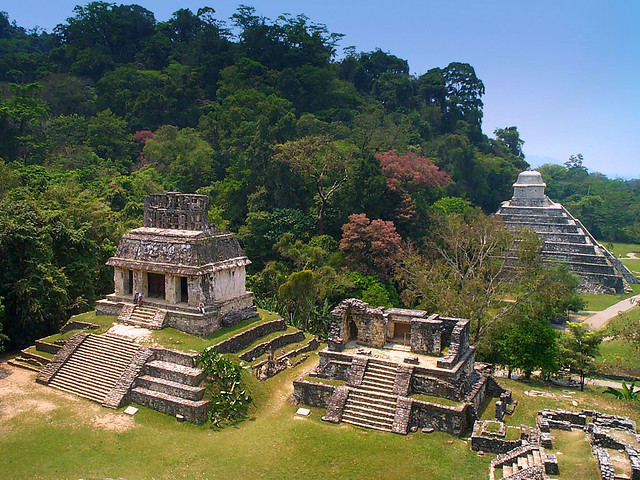 Mexico City has apparently more museums than any country in the world. That comes to no surprise. With such a rich history there are thousands of artefacts to pack in, from Mayan sculptures and Olmec art to Diego Rivera murals.

Outside the city, old cultures are still trying to survive: like the Lacandon Mayan tribe, for example, who now number around only 800. There’s the music, such as mariachi whose origins stretch back to the nineteenth century. Festivals like Day of the Dead inject a large dose of colour and religion to Mexican life.

The Food and Drink

Try a ‘cerveza’ (beer) or tequila in one of the traditional Mexican bars, the cantina. Food-wise, the staples of corn and beans feature prominently in the country’s cuisine – enchiladas, tacos and quesadillas are all well-known from their worldwide availability, but have a go at chicken with mole sauce (chocolate sauce, which gives the dish a real depth of flavour) or cecina, cured meat. Whatever you try, you’ll not fail to notice the influence Spain has had in Mexican food.

Visit the nine extinct craters and sand dunes of the Reserva de la Biosfera El Pinacate y Gran Desierto de Altar (quite a mouthful I know). The Bernal Monolith is said to be either the third or fourth tallest free-standing lump of rock in the world and you can visit it as part of a wine-tasting tour.

Cenotes in the Mexican forests (sinkholes) provide opportunities to swim or dive into the clear blue rain water that enters through a hole in the roof above. If volcanoes are your thing, you must see Pico de Orizaba, or Citlaltépetl, the second most prominent volcano in the world (after Africa’s Kilimanjaro). It’s the highest mountain in Mexico and part of the Trans-Mexican Volcanic Belt.

Visit Teotihuacan which came to prominence around the time of Christ, with its Pyramids of the Sun and Moon and the 2.5km long ‘Avenue of the Dead’ that stretches between the two. Along it lie a smattering of smaller buildings as well as the ubiquitous knick-knack seller. Chichen Itza is a more recent site (it flourished between 250-900AD) and the restored pyramid El Castillo (castle) is probably one of the most famous Mexican sites. The great ball court is another impressive feature here and the ball games held here often included an element of human sacrifice.

Monarch butterflies make their winter home in Central Mexico every year and they can be seen in the Monarch Butterfly Biosphere Reserve where they weigh down the branches of trees and you can find yourself surrounded by thousands of them. 40,000 pink flamingos make their home in the Rio Lagartos Biosphere Reserve and can be spotted there all year round. Thousands of green parakeets live in the forest at the bottom of Sima de las Cotorras (Sinkhole of the parrots) and be seen emerging every morning at dawn, returning home in the afternoon.

Are these reasons sufficient to get you to visit Mexico? I can find a lot more if you’re still not persuaded…?

Guest Author : Julie is passionate about two things – traveling and writing and she combines them beautifully in her travel articles. She occassionally writes for Fortina Spa resort, one of the top 5 star Hotels in Malta.
(Visited 44 time, 1 visit today)
Leave a comment culture, foods, Mexico tour, travel