Morocco’s countryside and coasts offer a large number of places of tourist interest. Lush oases, long beaches, high Atlas Mountains and fortified fishing ports are some of the attractions for the tourists in Morocco. You can easily understand the importance of Morocco as a great travel destination after visiting Marrakesh, Meknes and its cities of Fez. Information about some of the tourist attractions in Morocco is provided in this article for your guidance.

Though Volubilis was the part of Roman conquest since ancient times but at present it is situated in Morocco on the southern most border of Rome. The province of Mauretania Tingitana had its administrative center in this region. Many commodities such as olive oil and grain, which contributed to the economy of the province by exporting them to Rome, were produced in its fertile lands.

One of the four Imperial cities of Morocco which is closely related to Sultan Moulay Ismail is Meknes. It was surrounded with high walls and great gates by Sultan to convert it into a Spanish-Moorish styled impressive city. Mekens has lots of natural sites and historical monuments being an imperial city of Morocco. 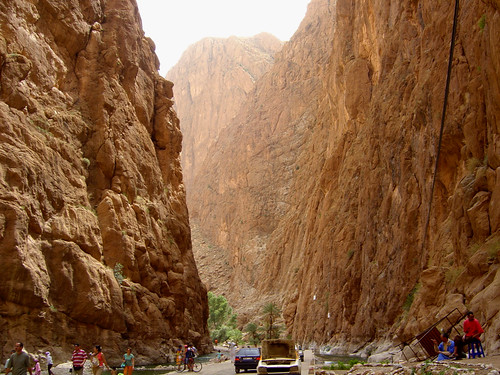 On the remote east side of high Atlas Mountains there exists Todra Gorge in Morocco. Dades Rivers and adjoining Todra were carved through the mountains through its canyons. Todra Gorge becomes the most spectacular in its last 600 meters span when the canyon meets a rocky track by narrowing down to just 10meters.

Morocco’s northeastern parts contain a fabulous mountain city known as Chefchaouen. The scenic beauty of this place in the backdrop of Rif Mountains gives a dramatic effect to the viewer. A number of Moroccan handicrafts including woven blankets, goat cheese and wool garments available in this city make it a popular shopping destination of Morocco.

Draa valley, situated in the south of the high Atlas Mountains, is surrounded by palm groves and various old Berber villages and Kasbahas. The valley is extended from Zagora in the east to Ouarzazate in the west. You can enjoy one of the scenic journeys in Morocco tours by driving through this valley.

The protected fishing port of Essaouria is a proper place to relax in Morocco. Portuguese called it Mogador until 16th century. The present city of Essouirawas developed for exchanging the trade relationship with European countries in 18th century. Windsurfing and kitesurfing on the powerful trade winds blowing through the bay constantly are the main point of attraction of this place.

Fes the larger part of this location looks like a medieval city. Population wise it is the largest area in the world. Donkeys, motorbikes and carriages are used as the means of transportation. Rooftop terrace of several restaurants and shops are used as a great way to get rid of crowded streets.

One of the fortified cities of Ouarzazate between the Marrakech and Sahara is Aït Benhaddou. 6 kasbahs with a small number of homes are situated within high mud walls in this city. Now days few families live in this walled city whereas most of the others live in the modern villages across the river.

People who visit Marrakech must visit Djemaa El-Fna as it is one of the top destinations of Morocco for tourists. This square at the heart of medina remains filled with people with monkeys and snake charmers along with some usually found stalls to entertain the tourists. But the crowd and food-stalls increase by the fall of night at this square.